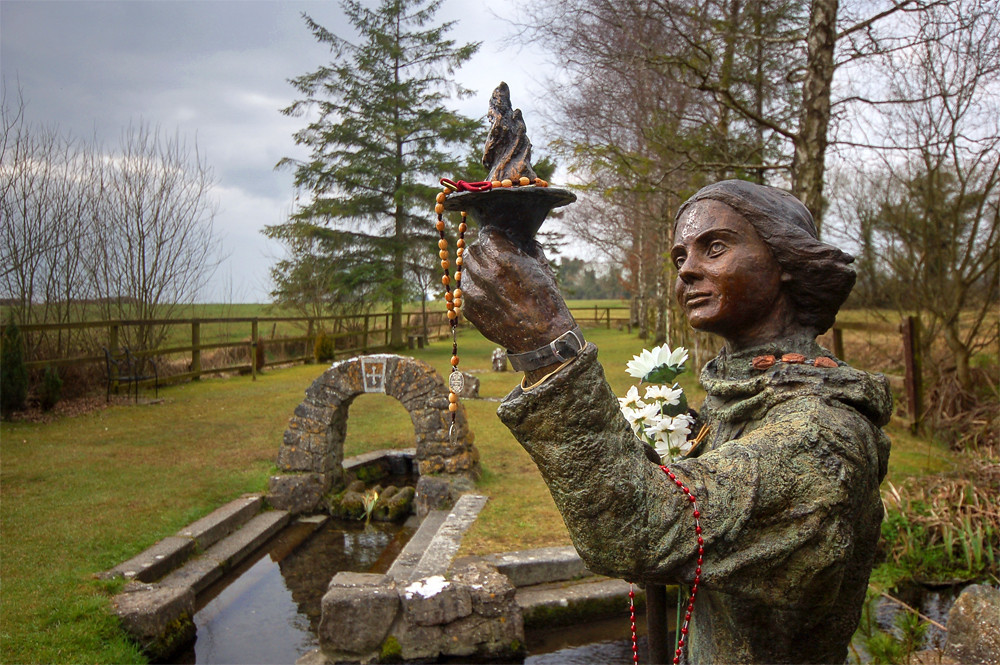 Imbolc has taking on new significance for me over the years.

This “cross-quarter” fire festival marks the halfway point between Winter Solstice and Spring Equinox on the Celtic wheel of the year. In the Celtic tradition, Goddess Brigid presides over this holy-day, and she is known as a “Priestess of the Flame”, who guards and tends the sacred fire.

On my Awaken the Goddess Within in Ireland retreat in Spring 2019, we visited the town of Kildare: renowned for its cathedral and Patron Saint Brigid, and its even more ancient pre-Christian connection to the Celtic Druids and Priestesses that studied and worshiped there.

Brigid, also spelled Brigit, Briget, Bríde, Brighid, Brigantia, or Bríg, means “exalted one” and refers to increasing light and daybreak; connecting her to the sun, dawn, and the longer, warmer days of Spring. She appears in Irish mythology as a member of the Tuatha Dé Danann: Ireland’s fae folk or little people.

She is associated with many things: poetry, smithcrafting, fertility, healing, and even prophecy and justice. Her legends, tools, and symbols often echo parallels with earlier Goddesses like Minerva, Isis and Vesta.

The woman who would become known as St. Brigid was born in Dundalk, Ireland in 450 AD. Her father was a pagan chieftain of Leinster and her mother was a Christian — sealing her destiny to be a “bridge” and embody the spirit of both pre-Christian Celtic and Christian Celtic Ireland. She went on to found the first monastery in County Kildare, Ireland.

Interestingly, medieval church reports say that Brigid’s ordination to Bishop was accidental. Mél, the presiding bishop, was either very excited or drunk, depending on who tells the story, but nevertheless Brigid remained a Bishop. After being questioned, Mél said: “No power have I in this matter. That dignity has been given by God to Brigid, beyond every (other) woman.” [1]

For centuries, Kildare was ruled by a double line of abbot-bishops and of abbesses, the Abbess of Kildare being regarded as “superior general” of the monasteries in Ireland. [2]

From what historians can tell, the oak groves in the area of Kildare were a spot for pagan celebration for millennia before the Romans or Christianity ever came to the British Isles.

The hill on which the cathedral sits was in prehistory the site of a pagan temple to the Celtic priestess-turned-goddess Brigid. The Christian church was built at the end of the fifth century. It was a simple thatched-roof structure, built under an oak tree, and named by St. Brigid Cill Dara, the Church of the Oak, from which the modern name of the county and city of Kildare was derived.

So is it just coincidence that this Christian nun had the same name as the pagan priestess of the British Iron Age?

I don’t believe in mere “coincidences”, as there must be a reason for this connection not only in name, but in character.

“Tying the two together, some believe the Christian saint was originally a convert from the community of acolytes tending the pagan sacred flame, “Brigid’s Fire,” on the site of what ultimately was to become the Fire Temple of St. Brigid. Their shared association with fire is one factor holding together the goddess Brigid with St. Brigid, Ireland’s female patron saint.”
~ Howard Goldbaum, Voices of the Dawn

On our visit to Kildare Cathedral, some of the women spent an hour in the remains of the Fire Temple, soaking up the energy. It’s not much to look at now, so you really must use your intuitive and psychic abilities to sense what used to be.

It is dug into the earth and still feels very feminine and womb-like. All over Ireland you see the custom of leaving an offering, a little gift, on “faerie trees” and sacred sites. The Fire Temple was no exception, with coins, bus tickets, handwritten notes, and other gifts lining the walls. We remarked that the Fire Temple felt “protected” by the larger cathedral, and could feel its sanctity. Archeologists and theosophists don’t all agree on the purpose or significance of the Round Towers, but it is generally accepted that once the Viking invasions of Ireland began in 795 A.D., they became shelters for humans, animals, and anything they didn’t want stolen during the raids.

For more than 200 years after St. Brigid’s death, the monastery had been enjoying a period of peace, prosperity, and expanding Christianity. During the invasions it was attacked and devastated some 16 times between the years 835 and 998. [4]

And resurrected every. single. time.

For me, this illustrates the indomitable spirit of faith. That love will always triumph over hatred and fear — even when it looks like it has been beaten.

The original flame of St. Brigid of Kildare was extinguished in the 16th century by the Bishop of that time, in an effort to put an end to any lingering pagan traditions in the Celtic Church.

Again, I don’t think it is a coincidence that in this same century the witch trials really gained momentum in Europe, reaching their peak of executions from 1560 – 1630. [5]

During these dark ages the spirit of Brigid and the Great Goddess in any form was forced underground. For hundreds of years, women especially were under more critical and suspicious watch of their behaviour and activities. Only in the last few decades are we emerging from this shroud of silence and fear, and finding our voices, and each other, again.

In 1993, at a conference entitled “Brigid: Prophetess, Earthwoman, Peacemaker,” the flame was ceremoniously re-lit in Kildare’s Market Square. A beautiful bronze statue remains as a tribute to the Kildare Fire Temple and St. Brigid.

The flame has since been moved to be housed in the Solas Brídhe (Brigid’s Light) centre of Brigidine Sisters, who proclaim themselves “a restoration of the ancient fifth-century Order of St. Brigid of Kildare.”

Some of our group made the 1km walk to the centre from downtown Kildare. One of the nuns gave us a tour and let us spend some time in a beautiful rounded room which had gorgeous acoustics as we sang a chant that honoured Brigid as both Goddess and Saint.

It was an unforgettable experience and I was delighted to learn that this order of Christian nuns are continuing Brigid’s world-bridging work by blending the Catholic faith with the “natural” celebrations of Celtic spirituality and the wheel of the year.

These nuns believe that the spirit of Brigid is even more relevant for us today as her legends and historical life speak to the importance of feminine leadership, caring for the land, inclusion of all members of society, peacemaking and peacekeeping, and sharing our inspiration and love for the divine through poetry, prayer and community celebrations.

In what seems to be another contradiction for this sun and fire Goddess, Brigid is also closely associated with sacred wells and springs. This speaks to her aspect as a Goddess of healing and fertility (life-giving). Some say this connection came about with Christianity and her conflation with Mother Mary, baptisms, and the like. “Mary of the Gaels” is another one of her names in Ireland.

There are a few holy wells dedicated to Brigid in Ireland, but our group’s favourite was the stream close to the Solas Brídhe centre. It is well maintained in a serene, park-like setting, surrounded by fields. The main photo at the top of this piece is of the statue and spring there. A few of us meditated, sang softly, and gave offerings to the water. Some reports say St. Brigid died at Kildare on February 1st, 525, and so that date became known as St. Brigid’s Day or the Feast of Brigid. Whether fact or not, it became superimposed on the older Gaelic festival of Imbolc (or Imbolg) that literally means “in the belly” in the old Irish Neolithic language, referring to the pregnancy of ewes (female sheep) at this time of year which was the early beginning of Spring in their milder climate.

There is no other figure in Irish mythology or history that is as complex and pervasive throughout the centuries as Brigid. Her stories and traditions are interwoven between paganism and Christianity in a Celtic knot that is as beautiful as it is contradictory.

Personally, it doesn’t matter to me what is “fact” or myth about Brigid the goddess or Brigid the Saint. She has succeeded in surviving over millennia, fulfilling different roles in different times, showing adaptability and evolution— which is what is required of our faith and spirituality.

What is important to us now is the revival of the values and customs associated with her, to repair our connection to the earth and her seasons and the values of compassion, creativity, and devotion.

Now when I celebrate Imbolc, and connect with Brigid, I will always remember my time in Kildare, in the old cathedral, the Fire Temple remains, and the modern Solas Brídhe centre. Her sacred flame continues to burn brightly in all hearts who honour Her. Some ways you can celebrate:

Join us for Keeper of the Sacred Flame.

You do not need to have any previous knowledge of Imbolc, of Brigid, or consider yourself a pagan to enjoy and benefit from this ceremony and guided meditation. All sisters are welcome!

During this ceremony we will:

Learn more and RSVP for this free event here:  https://floraware.ca/imbolc-ceremony/

However you celebrate, if you do, have a blessed Imbolc!

Please log in again. The login page will open in a new tab. After logging in you can close it and return to this page.